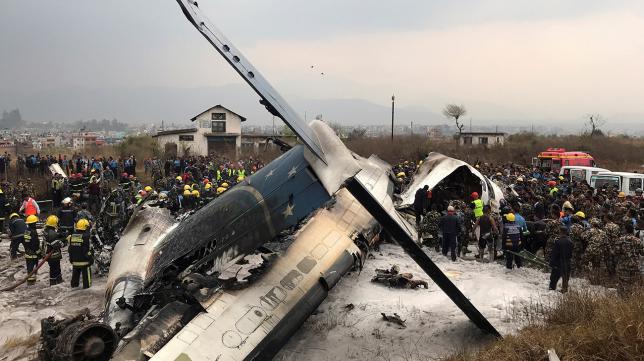 Airways office, Bangladesh is expressing sincere condolences for the victims and their families of US-Bangla Aircraft BS-211 crash incident at kathmandu Airport, Nepal on 12/March/2018.

The government has declared to observe mourning day tomorrow (Thursday) following the casualties in the US-Bangla Airlines plane crash in Kathmandu, Nepal on Monday.

(Nepalese rescue workers gather around the debris of the US-Bangla plane that crashed at Tribhuvan International Airport in Kathmandu yesterday. Photo: AFP)

US-Bangla Airlines in a press release said it has formed a probe body to identify causes behind the accident. It also expressed sympathy for the family members and relatives of the deceased and the injured.

“US-Bangla has taken initiative to hand over the deceased and injured persons to their near and dear ones through bringing them back from Nepal very soon.”

The plane that crashed (tail number S2-AGU) was 16 years old. Industry insiders claimed that the aircraft was involved in another accident in Saidpur airport in September of 2015.

On March 4, a US-Bangla Dash-8 made an emergency landing at Hazrat Shahjalal International Airport due to issues with propeller balance. The plane had 71 people on board and was heading to Jessore. Abid Sultan, the pilot of the US-Bangla Airlines plane that crashed in Nepal, has died, the airline’s spokesman Kamrul Islam says.The plane, a Bombardier Dash 8 Q400, took off from Dhaka at 12:52pm Bangladesh Standard Time and crashed into a fence of the Tribhuvan airport at 2:18pm Kathmandu time.Co-pilot Prithula Rashid and crew member Khwaja Hussain have died in the tragedy.

Airlines and airport at odds:

US-Bangla Airlines Chief Executive Officer Imran Asif claimed the Tribhuvan International Airport authorities were at fault.He said the air traffic control tower issued incorrect information which led to the crash.But TIA General Manager Raj Kumar Chettri said the pilot disregarded their messages and came in from the wrong direction.Chettri said that moments after the plane received permission to land, the pilot said he wanted to go in a northern direction. Asked by the control tower if there was a problem, he replied in the negative. A YouTube audio clip of a reported conversation between US-Bangla flight BS211 and the air traffic control (ATC) of Tribhuvan International Airport prior to the crash reveals startling confusion over what was going on. There appeared to be confusion over which end the plane was supposed to land, whether it had permission to land, and traffic on runway.

The ATC then said, “Okay that’s good but do not land. Traffic is on short final [approaching to land] runway 02.”

Abid confirms and said, “Let us know when we are clear to land.”

The ATC is then heard asking other traffic about their positions and instructing them even in what appears to be Nepalese.

A controller then tells BS211, “Runway clear to land, runway is vacated, either runway 02 or 20.”

The ATC then clears the pilot to land on runway 20. The pilot acknowledges and repeats the clear to land instruction.

BS211 is then asked by the ATC if it had the runway in sight and the pilot replied in the negative.

ATC then started to give instruction for a right turn but midway into to the sentence asked the pilot, “Confirm you have runway not in sight yet.”

Pilot Abid then said, “Affirmative, we have runway in sight requesting clear to land.”

However, the ATC is then heard asking another aircraft to hold as BS211 was on the short final to runway 20.

A person with no call sign is then heard asking if he was cleared to land.

An air traffic controller is then heard saying, “BS211 I say again turn …” The sentence was not completed and the rest of the tape is about the ATC trying to deal with the crash, including telling other planes that the airport is closed.