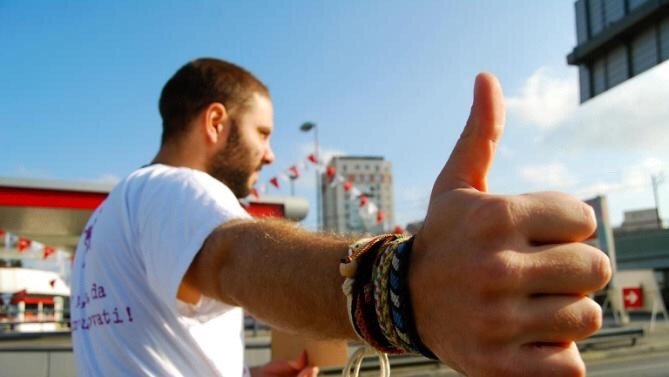 Have you heard about the incredible story of Ana Bakran, a 34-year-old Croatian who hitchhiked 44.000 miles across the world alone ? She travelled from Zagreb (Croatia) to Bora Bora in French Polynesia by cars, fishing boat, helicopter and even… horseback riding ! That’s one of the amazing stories we learnt listening to Tomislav Perko’s conference

3 days ago, in Brussels, Tomislav Perkotold us about his 7 years on the road with almost no money. Tom is a travel writer from Croatia who came to Brussels for a second talk. As always, the event was sold-out almost instantly … Luckily for us, one itinari team member managed to get tickets

In 2008, Tomislav Perko was a stockbroker in Croatia. He was hit hard by the financial crisis and lost everything. After a few months working in a cafe, he decided to hit the road and turn the world into his home.

As he was broken, he needed to use alternative ways of traveling (hitchhiking, couchsurfing, working/volunteering …). These ways helped him get out of his comfort zone and live extraordinary experiences. Here are some of the facts about Tom’s journey you should definitely know:

doesn’t really give you tips on travelling with almost no money, nor wants you to turn traveling into your career.

It rather helps you realise that if you dream about something, you should find way to make it happen (whatever the dream is!). Tom also tells us it’s up to you to put deadlines in life to achieve what you really want. Waiting for the right moment or other people will ultimately lead to regrets and missed opportunities.

Tom ended his talk with one big question : What would you do if you know you could not fail ? Definitely, that’s the best way to conclude this evening and to keep dreaming !