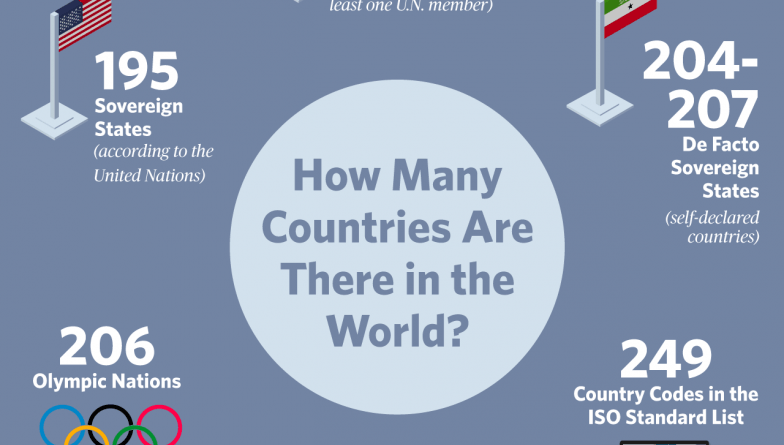 How Many Countries in the World?

Look at the post and find the answer why!

THE UNITED NATIONS SAY THERE ARE 195 ‘COUNTRIES’

The United Nations list is probably the best to work off, it’s pretty expansive, not TOO political (more on that in a second), and if you recognized  by the UN then realistically you’re pretty much a country. So they say they have 193 members. So that means 193 countries, right? Not quite!

The UN also see 2 permanent observer states in Palestine and the Vatican City, both of which I see as countries and Palestine, in particular, is one of my favorites, so that would make the count 193 + 2 =  195. So 195 countries? Calm down sailor, we’re not there yet. That then excludes Taiwan (recognized by 22 countries), and Kosovo (recognized by 109 other countries), so what to do?

Lots of people learn about the world’s list of countries by watching the Olympic Games every two years. If you’re one of them, you might be confused at why the Olympic Parade of Nations claims over 200 members, even though your atlas only has 195.

This is because the Olympics didn’t always require applicants to be independent countries. Dependent territories with partial self-government have sometimes been approved by the International Olympic Committee (IOC), and a couple of the partially-recognized states mentioned above have also managed it.

201 States With at Least Partial Recognition

Several more country candidates are left out of the UN itself, but are still officially acknowledged by at least one UN member (this kind of official acceptance is called “diplomatic recognition“). These controversial countries are usually labeled on world maps as disputed territories or special cases, if they’re on the map at all.

But wait, there’s more! Those six partially recognized countries aren’t the only breakaway states with full self-governance. There are at least three more self-declared countries that aren’t recognized by any UN members at all, but still operate independently from the countries that claim them. These are often called “de facto” sovereign states, a fancy Latin way of saying they’re independent countries in actual fact, even if not on paper.

Ever been filling out an internet form, and had to choose from a surprisingly long list of countries? You were probably looking at the international standard “country code” list, formally known as ISO 3166-1. Lots of companies and other organizations adopt this standard list instead of spending their own time compiling one. The standard also includes convenient two-letter codes for each country, like us for the United States, de for Germany, and jp for Japan, which you might recognize from website addresses specific to those countries.This ISO standard is based on an official list kept by the UN…but then why on Earth are there 249 country codes? That’s way more than the total number of UN member and observer countries! Well, the standard list does leave out some breakaway states not recognized by the UN, but makes up for it by listing dependent territories separately from their parent countries. In other words, the ISO list is more an answer to the question, “How many countries and territories in the world?” than “How many countries in the world?”

This means there are “country codes” not just for actual countries, but also for nearly-independent states, overseas colonies, uninhabited islands, and even Antarctica! This is important, because organizations might need an option for every place that any person can be located, and dependent territories often aren’t technically part of the countries they belong to.

Soccer — or “football” as it’s known in many countries — is the world’s most popular sport, and most international matches all the way up to the World Cup are regulated by an organization called FIFA. If you’re a soccer super-fan, you might know that, until recently, there were 209 member countries that compete in FIFA matches (even though most don’t make it to the World Cup). That’s already more than the number of Olympic Nations, and definitely more than the total independent countries on most world maps.

So there you have it! Next time someone tells you “There are 194 countries in the world,” remember that the real answer isn’t so simple!

Nothing is simple when defining what makes a country, so for that reason, there are a lot of disputed territories around the world. Now while Catalonia may fight regularly for independence, they are still very much part of Spain so they certainly can’t be counted. This is not a political endorsement, just a simple fact.

However, the following territories have declared themselves independent  (although those declarations aren’t officially ratified by most nations), and therefore not yet recognized by most of the rest of the world:

Declared its independence from Somalia in 1991. Not recognized as a country by any other country, officially still a part of Somalia proper.

Declared its independence in 1991. It isn’t recognized by any UN member states, and by only 3 UN non-members: Abkhazia, South Ossetia and Transnistria. Officially part of Azerbaijan.

Declared its independence in 1983. It is only recognized by 1 UN member state, Turkey. Officially still part of Cyprus proper.

Declared its independence in 1976. It is recognized by 47 UN member states (plus 37 additional member states who used to recognize it) as well as South Ossetia. Officially still part of Morocco proper.

Declared its independence in 1990. It isn’t recognized by any UN member states, and by only 3 UN non-members: Abkhazia, South Ossetia and Nagorno-Karabakh. Officially part of Moldova.

Declared its independence in 1999. It is recognized by 4 UN member states (Russia, Nicaragua, Venezuela and Nauru) and 3 UN non-member states (South Ossetia, Transnistria and Nagorno-Karabakh). Officially part of Georgia proper.

8. (Iraqi) Kurdistan and beyond (visited Iraqi Kurdistan 2015, yet to visit Iraq proper)

They have their own Kurdistan Regional Government, 32 countries have diplomatic relations in Erbil, Kurdistan’s de facto Capital city ( in addition to the UN, EU etc), they also have ’embassies’ in foreign nations around the world. To visit Iraqi Kurdistan,  tt’s visa-free for most western nations, a different situation to Iraq proper where you need an Iraqi visa. It has its own flag, its own sports teams. It’s pretty much a country, not as strong a claim as Somaliland but still, to go to Kurdistan and claim to have visited Iraq is a little weak. I’m guilty of that!

Cook Islanders are New Zealand passport holders, and New Zealand is officially responsible for the defence and foreign affairs of the Cook Islands (and Niue). However, these responsibilities confer New Zealand no rights of control per se.  It is however recognized by 11 UN member states. As of 2016, the Cook Islands, Niue, and Kosovo are the only states that participate in UN specialized agencies, but which are not member or observer states of the UN itself.

Niueans are New Zealand passport holders, and New Zealand is officially responsible for the defence and foreign affairs of Niue (and the Cook Islands). However, these responsibilities confer New Zealand no rights of control per se.  It is however recognized by 7 UN member states. As of 2016, the Cook Islands, Niue, and Kosovo are the only states that participate in UN recognized agencies, but which are not member or observer states of the UN itself.

And then, of course, the devolved situation of the UK with Northern Ireland, Scotland, England and Wales. Here’s when we talk about technicalities, 2 days in London and you’ve visited all of the UK. But what about Scotland for example? The UK is the country by definition, but the devolved situation is difficult, so from a travel standpoint, not a legal/technical one, you should really visit them all. Besides, Edinburgh is one of the best cities in the world, you HAVE to go there.

Furthermore, there are other places that lots of people consider countries but all belong to an actual sovereign member state.

Where are they located?

countries are in Africa

Flags of all countries in the world

Is Taiwan a Country?

Is Kosovo a Country?

110 United Nations members recognize Kosovo. It is also a member of several official organizations, including the International Money Bank and the World Bank. However, its statehood has been disputed ever since it declared itself independent from Serbia in February of 2008. The United States has kept official relations with Kosovo since 2008, and recognizes Kosovo’s sovereignty.

The word  continent  is derived from the Latin terra continents, meaning connected land or continuous land. The word was used in translations of Greek and Latin writings about the  parts  of the world. Because at some points, Asia and Africa, and North and South America are only separated by artificial canals, they would in the literal sense be considered together as one continent. In history, there have been many different ideas about  which land masses are continents  and still, in some parts of the world they consider Europe and Asia as one continent. And some say there is one America, thereby combining North and South together.

In 1752, Emanuel Bowen defined a continent as “a large space of dry land comprehending many countries all joined together, without any separation by water. With this definition Europe, Asia, and Africa together form one continent and America forms another. But convention won from definition in this case, and nowadays, the most common convention (and the one used on this website) is that the Earth has seven continents: Africa, Asia, Europe, North America, South America, Antarctica, and Australia.

The first continents to be named as such are Europe and Asia. Greek mariners gave these names to the lands on either side of the waterways (the Aegean Sea, the Dardanelles strait, the Sea of Marmara, the Bosporus strait and the Black Sea). Greek philosophers then debated whether or not Libya (now Africa) should be considered as a separate part or as part of Asia. The first idea prevailed.

When (South) America was discovered (around 1502), a fourth continent was born. In 1505 North America was thought of as part of Asia, but in maps of 1507 the continents are separate. Yet most geographers still combined North and South America, so that there were four continents in total.

In 1606 Australia was discovered, but it was considered to be part of Asia. Only in the late 18th century, more and more geographers started calling Australia a continent. In 1802 Antarctica was discovered and described as the fifth/sixth/seventh continent by Charles Wilkes in 1838.

Until today, there is no worldwide convention. Distinction between North and South America and Europe and Asia is still nontrivial in some parts of the world.

So if you’re ready to Change your life-

2.Write something important with informative post and email us

condition: Be passionate with your work